Given that angular is the central point of this article let's briefly talk about angular and the tools we will use in this tutorial.

Angular is a popular frontend framework maintained by Google. Apart of its short learning curve, It's also known as a cross-platform framework because one application built with angular can be deployed for web, mobile web, native mobile and native desktop. You can visit their official website to learn more detaily about it.

Angular-material is a UI Component framework which implements Google’s Material Design Specifications for the latest version of Angular. At the time of this writing, version 7.2.0 , Angular Material provides a set of reusable and accessible UI components based on Material Design.

Angular-cli is a command line interface to scaffold and build angular apps using nodejs style (commonJs) modules. Not only does it provide you a scalable project structure, instead it handles all common tedious tasks for you out of the box.

At the moment of writing this article, the most stable version of angular is 7.1.4. We will use angular-cli and angular-material to build a simple todo application with the following features:

Before you begin, make sure your development environment includes Node.js® and an npm package manager.

The Angular CLI, and Angular apps depend on features and functionalities provided by libraries that are available as npm packages. To download and install npm packages, you must have an npm installed.

This quick start uses the npm client cli, which is installed with Node.js by default.

To check that you have the npm client installed, run npm -v in a terminal/console window.

You need the Angular CLI to create projects, generate application and library code, and perform a variety of ongoing development tasks such as testing, bundling, and deployment.

To install the CLI using npm, open a terminal/console window and type the following command:

Now it's time to use the tools we just installed to create our application with all the necessary libraries, files and packages needed. To start, we run a single angular cli command to do that. Open your terminal/console window and type the following command where app-name is the name of your application as you wish it to be called:

The ng new command will take a few seconds depending on your connection speed  to setup your project. So, let us create our todo application (you just did when you typed the command above), replace the app-name with todo-app and run the following command:

You can see the project structure by openning the folder in your window explorer or in your favorite text editor as seen below. 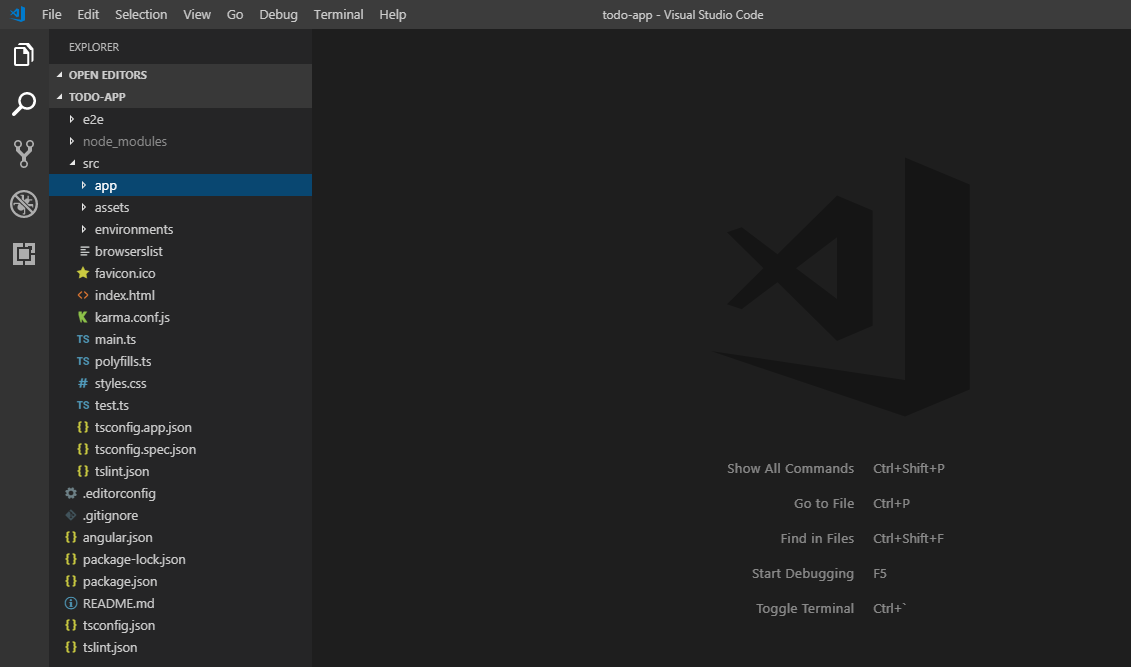 As you can see, the src directory is where everything happen. All our components, services, modules and our entire developement flow will be going on there. our application has only one component now, the app, with its basic structure as you see here.

As you can guess, the app.componnet.css is to add a specific stylesheet to the app component, the component.html for the mockups of the component, the componnet.ts is a typescript file that contains the logic of our application. It's essentially a javascript file written in TypeScript(it's designed for development of large applications and transcompiles to JavaScript). We also have the app.module.ts and finally the app.component.spec.ts is for the unit tests of the source file. The convention for Angular applications is to have a .spec.ts file for each .ts file. They are run using the Jasmine javascript test framework through the Karma task runner when you use the ng test command. (Don't worry about terms you may not undertand now, they will be understood as you get to build more apps and compile them)

Angular includes a server, so that you can easily build and serve your app locally.

The ng serve command launches the server, watches your files, and rebuilds the app as you make changes to those files. The --open (or just -o) option automatically opens your browser to http://localhost:4200/.

Baaaammmmmmm! your app is up and running: 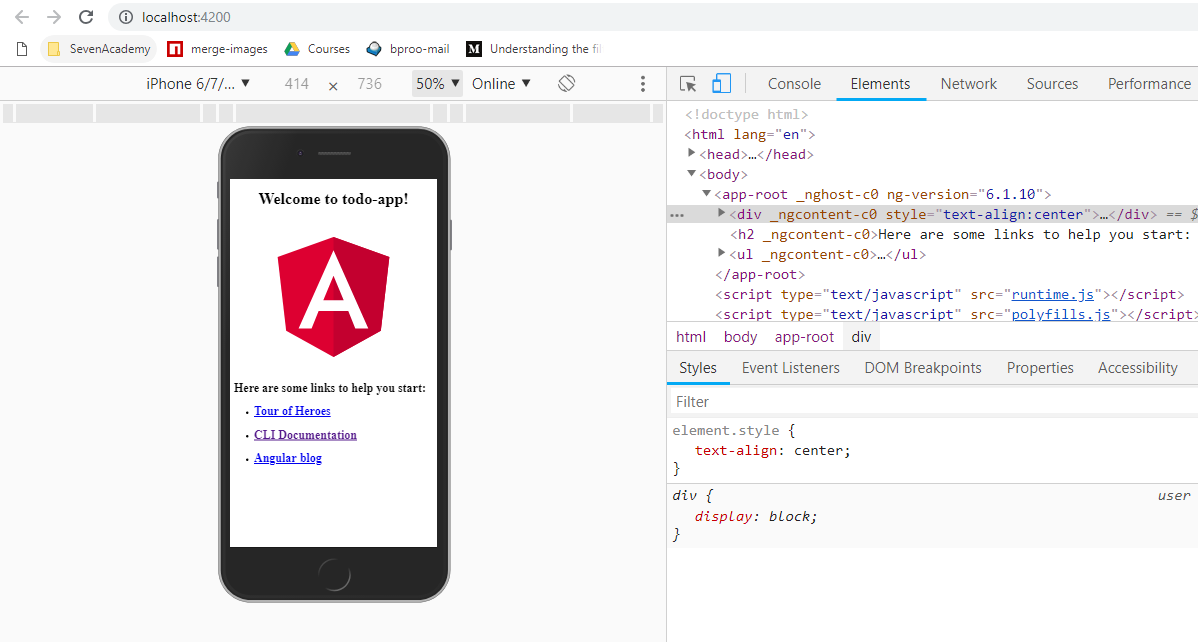 Components are the fundamental building blocks of Angular applications. They display data on the screen, listen for user input, and take action based on that input.

As part of the initial app, the CLI created the first and Main Angular Component for you. It is the root component, and it is named app-root.

The browser reloads automatically with the revised title. That's nice, but it could look better. 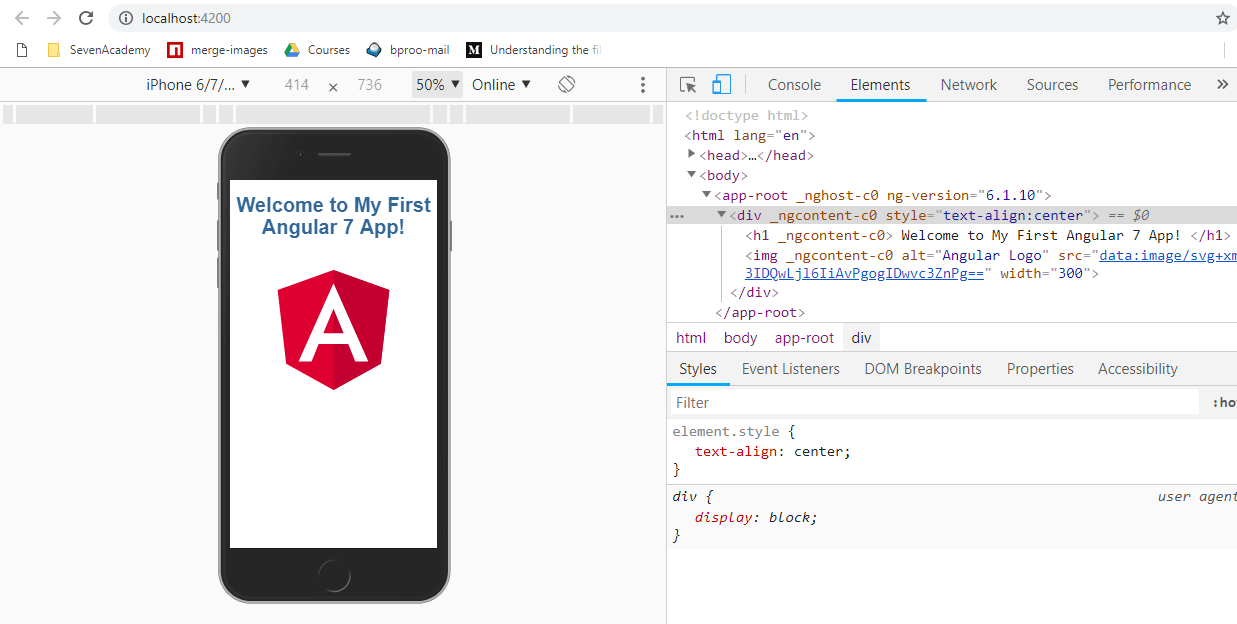 Great! we can now start our todo application.

The next thing to do will be to install this three angular packages which come with the current version of angular material design. Go to your npm command-line tool and run the following command: 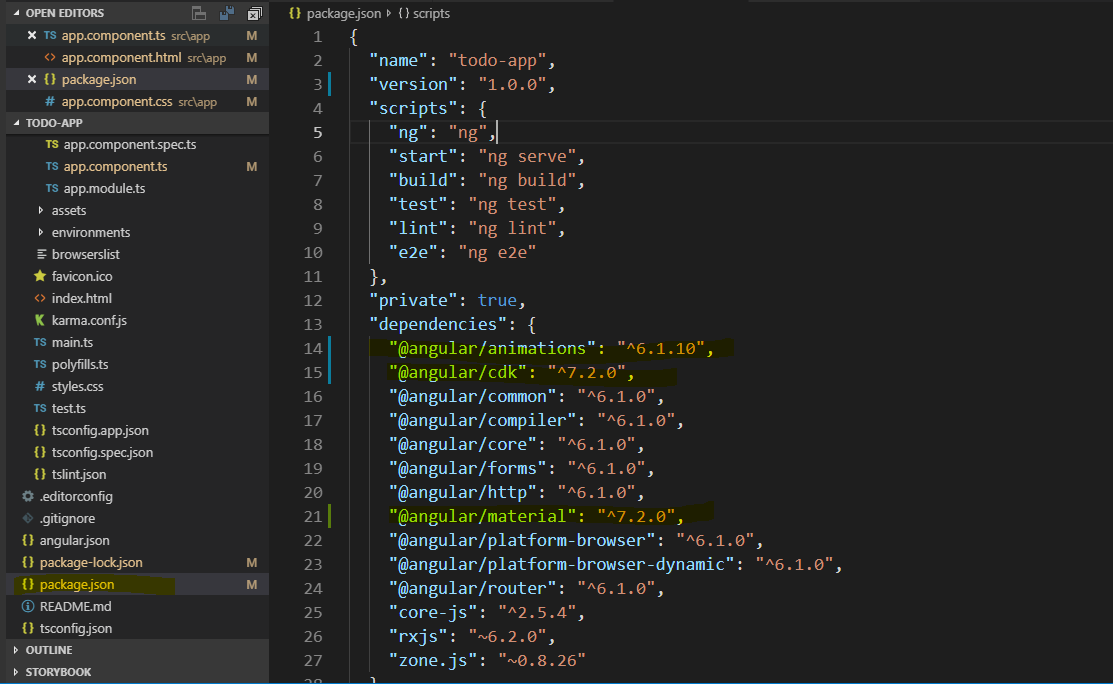 From the angular material documentation, we can see that it's made up of multiple components that can be imported as we need. For example in this application, we will need six essential components named: MatToolbarModule, MatButtonModule, MatIconModule, MatListModule, MatDialogModule, MatInputModule

To do that, we need to inject all these modules inside our app.module.ts this are all the modules we will use for the application

The app.module.ts is like the Central Processor unit of an angular application. All the components, modules, services, filters and libraries all link to it. So it's like the heart of a human being. You will notice that it will get updated automatically each time you add a new component, service, ... using the ng generate command.

Component Blocks of our application 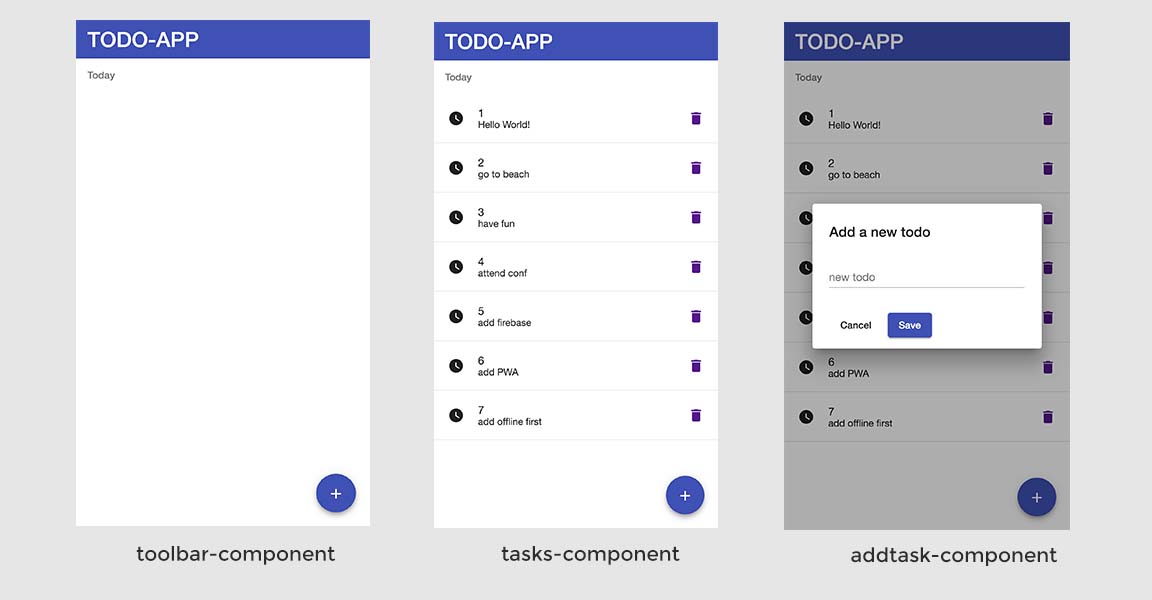 As you can see here, our app is made up of three main compoment as named above. The first component is to handle the toolbar. The second one is mainly for the listing and the last one is to add a new task to the list.

Add this external link at the head section of your index.html for the material icon to show

then also add this one at the beggining of your style.css for the material design theme and the style of the add button

now you are ready to go.

We run the following command to create a new component in angular. The last word here is the name of our component and the CLI will append .component.extension to all our files as you can see after creation.

code of the component ./src/app/toolbar/toolbar.component.ts

code of the template ./src/app/toolbar/toolbar.component.html

code of the style ./src/app/toolbar/toolbar.component.css

The only thing to learn here is that the component has a title property with the value of   TODO-APP. You should also notice that the template file has the mat- prefix string on all its tags. It's coming from the material design as I said before you can learn more from their official wesite. The {{ title }} refers to the title property for the toolbar.component.ts and we end up adding the font-size of our title with the above css.

we do that with our generic command form angular CLI as follow:

code of the component ./src/app/tasks/tasks.component.ts

From here we start using a custom service named TodoService don't border yet about that we will get to it shortly. You should know that we are adding an array called todos that graps all the todos from the service when the component is bootstraped. We will also add a delete function there to delete a given task.

code of the template ./src/app/tasks/tasks.component.html

here you should notice the *ngFor directive that loops through all the todos list and displays their id, title, and add a delete button with the pre-declared deleteItem() method from our typeScript logic.

Finally we add our service to manipulate the data flow within our application. Run the following command.

It's going to generate our service, let us add all our resource methods to get whatever data we need. We will have  getTodos() to grap all the array content, the addTodo() to push a new element to the array and the deleteItem() to actually remove the specific element from the array. Here is the content of that service.

code of the service ./src/app/todo.service.ts

e.g to use it in the tasks component we have to inject it like this as we saw previously.

This seems to be the most difficult part of our app due to the intergration of the material design dialog module it requires many components and libraries. Here is the code to make it work.

code of the component ./src/app/addtask/addtask.component.ts

code of the template ./src/app/addtask/addtask.component.html

code of the style ./src/app/addtask/addtask.component.css

Add the following to your app.module.ts at the ngModule object for this dialog to work.

Final code of the AppComponent

code of the component ./src/app/app.component.ts

code of the template ./src/app/app.component.html

that should be all and your app is now having all the functionalities.

I am sorry if this was too long. Here is the complete code on github.